I had a shaman come to my house (a real shaman–as opposed to a faux shaman– and, a good one) last weekend for a ceremony. It was very positive. I know it probably sounds a bit woo woo for many of you readers; but I’m sure you’re none the worse for reading this.

For several days after the shaman came I didn’t feel like doing much, though I did some good cooking and for some odd reason had a craving for…..tzadziki sauce.

So, I was compelled to make it; and something to go with it, too. A pretty good recipe for tzadziki sauce is here; I followed it, mostly, though I added fresh mint to mine and substituted dried dill. The steps are pretty simple, you strain some regular yogurt (I prefer full-fat organic) overnight in the fridge; just put a few cups in a coffee filter and set it in a sieve over a cup:

The next morning I took the strained yogurt out of the fridge; it was crazy, there was 1 cup of liquid for 2 cups of yogurt!

Then I peeled and seeded cucumbers my mom gave me from her garden, yum, and pureed them w/garlic; the fresh mint is on the side:

This appears to be the consistency you want for your cucumbers once they’re chopped:

Then I added the yogurt, mint and dill: this is how it looked, in the end:

I have a book from the library which is very good, Quick and Easy Indian Cooking by Madhur Jaffrey. I’m sure the author would prefer that I say I bought it; but, I’m saving for Newfoundland, so, the library is my new friend.

I made a recipe called Ground Turkey or Chicken with Peas; it’s very yummy in pita bread, with homemade tzadziki sauce and chopped fresh tomatoes. It’s a bit cross-cultural but I got 4 dinners out of this: 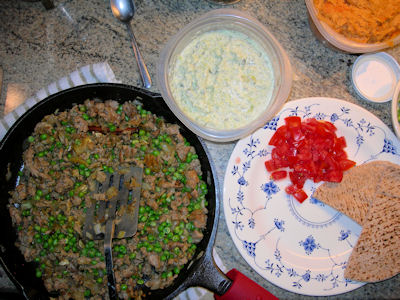 I then had some fresh apricots that were quickly taking a turn for the worse; I made an apricot upside-down gingerbread cake, the idea and the recipe are sort-of based on this recipe I found online, which I slightly modified (I used less sugar, for example).  Kind of an odd combination of flavors, you’d think; I made it for the nurses at work, and the reviews were good.

One thought on “Summer Cooking Frenzy”