Good white bread is as close as I get to junk food. I would fail at giving up refined foods because of this. Instead of buying stuff I think of as not-quite-very-healthy, I decide if I want to eat it I have to make it from scratch: it’s fairly easy, after all, to pick up a bag of Newman-Os or an OK loaf of sourdough from Trader Joe’s. Making it takes some effort.

I started a loaf of bread this morning and let it raise during the day while I was at work. By 10:oo tonight I had a nice loaf: 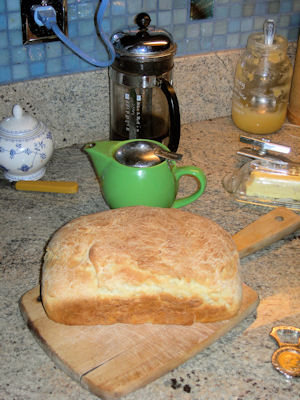 That’s my pope bottle-opener there on the bottom.

I haven’t baked bread in years. I took the recipe from the Treasury of Newfoundland Dishes, it’s the second bread recipe called “White Bread”. Yes, I did spend much of my life in a bakery; but I can’t always remember proportions. I think the recipe called for too much salt.

I just had a hunk. Yummy. But not as good as the white bread my cousin Pat’s wife, Betty, makes every week in Newfoundland.