Here I am with my nephew Sebastian as I play along with him during his oboe practice last week when I was in Madison, WI; you can tell there’s a smirk-gene we both share:

One rather sad part of my recent trip to Madison was the funeral, seen below, for Sponge the Rat; Sponge got out one night, wasn’t found till the morning, sustained a small injury to his front paw and died 2 days later, likely sepsis:

The surviving rat, Pat, seemed affected by the death of Sponge; so a new rat was purchased, Larry. Here is Larry’s little cage (he’s younger) next to Pat’s big cage; the 2 need to live in their parallel worlds for a few days at least to smell each other, then maybe they can meet for the first time in a safe, open space:

We went to a dog wash benefit for the Jefferson County Humane Society at the Tyranena Brewery in Lake Mills, WI; we brought a friend’s dog. Check out the tall hop vines in the background: 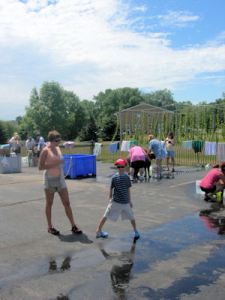 Here’s some hops up close and personal:

One morning Sebastian made exceptionally yummy buttermilk pancakes, all of which were eaten in no time flat:

Later that same day I convinced the kids to pose for a photo during commercial breaks of the Transformers movie; Sebastian is actually smiling, and Damien looks like smiling is clearly an unsafe thing to do:

Here’s Damien with his mom sporting a much better smile:

A blurry photo of the state capitol from the lake after a long, humid day: 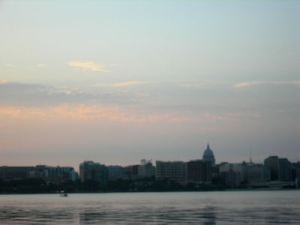